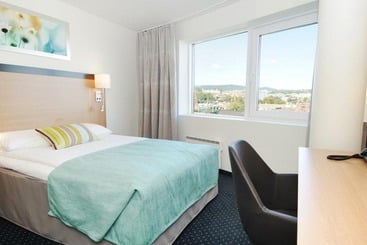 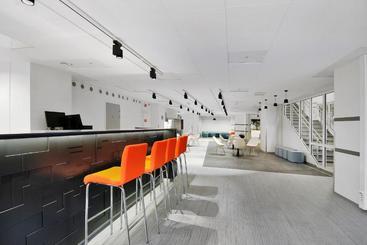 Anker Apartment is situated in the trendy area called Grunerlokka, in the city centre of Oslo. There are bus and tram stops...

We are returning the 5 %
from 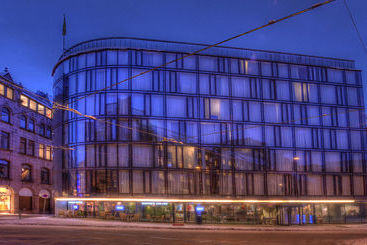 The hotel is situated in a quiet location in the centre of Oslo, just a stone's throw from the famous Karl Johannsgate, Oslo's... 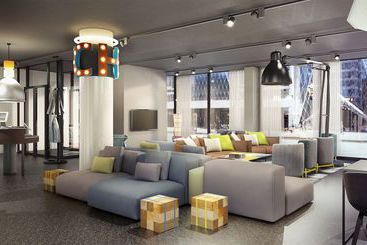 We are returning the 5 %
from

The hotel is located in Skoyen, close to Vigeland Park, museums and beaches. It is only a 40 minutes drive from Oslo-Gardermoen...

Location: 2 Km. from the centre of Oslo, in the Vulkan area along the river Akerselva. Close to the Grunerlokka area, with...

The city of Oslo is divided into forests, fjords and modernity, a combination worthy of a visit. It was originally founded around the year 1000; by the Norwegian king Harald the Ruthless. The city suffered numerous fires during the middle Ages and, after merging with Denmark, in the 17th century, King Christian IV renamed the city Christiana and built a fortress and the city that surrounds it. In the 19th century it became the capital of the Norwegian Kingdom and in 1925 its name was changed back to Oslo.

In the historic part of town, visitors can learn about 700 years of Oslo's history in the Akershus Fortress (Akershus Festning) and its medieval castle which was transformed into a Renaissance palace in the 17th century century. At the foot of the fortress and to the west one can visit the Nobel Peace Prize Centre (Nobels Fredssenter), City Hall (Ràdhus) with its two characteristic towers where the Nobel Peace Prize is awarded on December 10 every year and the Royal Palace (Det Kongelige Slott) with its neo-classical façade, currently one of the official residences of the royal family. Not far away, behind the palace, one can visit the Sculpture Park (Vigeland), one of the most attractive places in Oslo, where there are 212 breathtaking sculptures of Gustav Vigeland in the form of human figures in everyday poses. Near the grandiose neo-Romantic building of the Parliament (Storting) which dates from the 19th century, is Oslo Cathedral (Oslo Domkirke), a 17th-century Baroque building, with its impressive Baroque pulpit and enormous volume. On the way to the Central Train Station is the recently-built Opera House, inspired by an iceberg that emerges from the waters. Although it is quite far away, visitors should not miss the chance to see the Munch Museum in Tøyengata 53 and admire the works of this artist.

In the small peninsula of Bygdøy, one can enjoy a visit to the Polar vessel of Framm (Frammuseet) and learn about the history of polar expeditions. Without forgetting the Museum of the famous explorer Heyerdahl, the Kon-Tiki Museum and the Museum of Viking ships with boats that are perfectly preserved, dating back to the times of the Vikings. On the outskirts of Oslo is the Skiing Museum (Holmenkollen) where visitors can learn about the 4000 years of history of this sport and use the trampoline jump tower.
See more See less

The most centrally located hotels in Oslo with the best ratings are: Hotel Continental, Hotel Bristol and Thon Hotel Rosenkrantz Oslo.

It depends on the category of the hotel. If you want to stay at a 4-star hotel in Oslo, the average price per night is €49, while you will pay an average of €45 for a 3-star hotel, and in a more luxurious 5-star hotel, you"ll pay around €97.

You can make reservations at Hotel Continental, Hotel Bristol and Hotel Grand if you"re looking for a hotel with valet service for your visit to Oslo.

If you need a hotel with disabled access in Oslo, we recommend Hotel Continental, Hotel Bristol and Thon Hotel Rosenkrantz Oslo.

If you´re looking for peace and quiet and want to stay at an adult-only hotel in Oslo, we recommend Comfort Hotel Boersparken .

According to our clients, if you´re travelling with children, the best hotels in Oslo are Hotel Scandic Solli, Thon Hotel Vika Atrium and Hotel Continental.

If you want to save time, the hotels in Oslo with express check-in and check-out are Thon Hotel Vika Atrium, Hotel Clarion Collection Folketeateret and Hotel Voksenåsen.

Some of the options for hotels with non-smoking rooms in Oslo are Hotel Continental, Frogner House Apartments Skovveien 15 and Hotel Bristol.