This new Hostal is located in the centre of Nerja in the main street, Calle Pintada, one of the most famous of the Nerja...

Located at 500m from Playa de la Torrecilla and 5min. walking to Balcon de Europa, we offer you a privileged...

Public transport: -The hotel is located next to bus station. By car: -Follow the N340 towards Almería and Motril. -Take...

The hostel is situated 5 minutes' walk from the bus station, the beach and the famous Balcón de Europa. Being in the centre,... 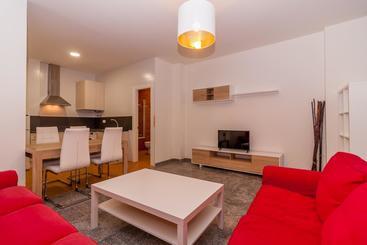 Hostal Lorca has a small outdoor pool, garden and sun terrace. It is set in the historic center of Nerja, and is a 5-minute...

This enchanting hotel is located directly in the tourist centre. It is just a short five-minute walk to the renowned Balcon...

Nerja is a small, tranquil coastal town belonging to la Costa del Sol in Málaga.
Its very corners are famous thanks to a television series from the 80s called Verano Azul, which displayed the towns features thoroughly and realistically. In fact, many of the tourist routes that the town offers allude to this series, and organized tours show the places of the filming.
The best known location is the Balcon de Europa, with its añones from which one can contemplate the well known beach of Calahonda  practically a cove, it is accessed through an opening at the end of Puerta del Mar street. To the other side of the Balcon de Europa is the beach of the Caletilla.
Also highly regarded is Burriana beach, which, surrounded as it is by comforts and urbanizations, is a concentration of affluent tourism.
There are a few rustic beaches like Chicho, Palyazo, and Cañuelo: more isolated, they are only moderately frequented in summer.
Another site to enjoy is Cala del Pino, where large rocks separate a sandy cove into two different beach sections, situated next to a beautiful pine grove.
Although the town seems small, there are many fascinating sites to visit in Nejra: the famous caves (with some of the largest formations of stalagmites and stalactites yet found), the Museum of Fleas, the paths where donkeys pull buggies, and the cliffs of Maro.
The main road centers on the Plaza TutiFruti, where the best offerings for nocturnal leisure are found, while on the beach of Torrecilla is a multitude of chiringuitos open until daybreak.
See more See less

The most centrally located hotels in Nerja with the best ratings are: Apartamentos Latin, Hostal Plaza Cantarero and Hotel Casa Manuel.

If you're bringing a vehicle, we recommend that you book a hotel with parking in Nerja, like Apartamentos Latin, Hostal Don Peque or Apartamentos Abril.

If you need a hotel with disabled access in Nerja, we recommend Apartamentos Jimmy, Parador de Nerja and Hotel Paraiso del Mar.

If you want an adult-only hotel in Nerja, some of the best options for adults only are Inn Ana, Hotel Riu Monica - Adults Only and Hostal Don Peque.

According to our clients, if you´re travelling with children, the best hotels in Nerja are Hotel Los Arcos, Apartamentos Jimmy and Hostal Tres Soles.

If you want to save time, the hotels in Nerja with express check-in and check-out are Apartamentos Jimmy, Hostal Don Peque and Parador de Nerja.

The best hotels with a pool in Nerja are Apartamentos Latin, Hotel Puerta del Mar and Hotel Los Arcos.

Some of the options for hotels with non-smoking rooms in Nerja are Hostal Tres Soles, Hostal Plaza Cantarero and Hostal Don Peque.

The best-rated hotels in Nerja with a gym are Hotel Riu Monica - Adults Only, Toboso Aparturis and Hotel Balcón de Europa.